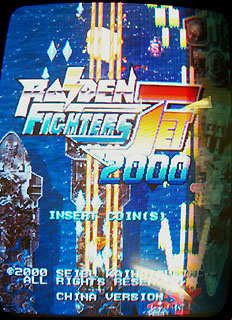 The only RFJ machine I have seen so far is this version. On the title screen, a "2000" is added to the Raiden Fighters Jet logo. The copyright notice on the title screen reads: "(C) 2000 SEIBU KAIHATSU INC. / ALL RIGHTS RESERVED. / CHINA VERSION". (RFJ was copyrighted in 1998). Graphically, the game is perfect. On the machine I played, the music and sound effects are glitchy. Music is almost inaudible, and it only consists of short clips of the actual RFJ music looped over and over. Also, some of these clip loops are repeated in other stages. Phase 2 doesn't have that creepy haunting techno track in RFJ 2000, but a short looped music clip that was also used in Level 30. Sound effects are very bad in this particular machine. Some of the sound effects fail to play, or some play too loud. Like the music, even the sound effects are repeated. The Judge Spear bomb explode sound uses the same sound effect as the Raiden mk-II bomb explode sound!

RFJ 2000, at least on the machine I played, is also far too easy. Every ship begins with SIX bombs on each life. Enemies shoot sparingly, and most of the bosses are pushovers. The only even remotely difficult stages in this game are LEVEL 45 and PHASE 1. PHASE 2 is laughably easy, and the giant supertank endboss is pathetic. The true final boss is still hard, however.

According to The Sheep, RFJ 2000 appears to be a legal, non-bootleg version. Printed on the board itself is the message "(C) 2000 SYS386H Seibu Kaihatsu Inc." Comparing the RFJ 2000 PCB with a real Seibu SPI System PCB, you will notice a major difference. The RFJ 2000 PCB does not use daughterboard cartridges like the Seibu SPI. The Game ROMs are built right onto the RFJ 2000 PCB; everything is packed onto the RFJ 2000 PCB. It uses an AMD 386 DX-40 as its main CPU (Seibu SPI uses an Intel i386DX-25), and it appears to handle everything, including graphics and sound, which could explain the slowdown I sometimes encounter while playing RFJ 2000. The graphics hardware is non-standard, and the Yamaha YMF-271 sound processor is missing on the RFJ 2000 PCB. In its place, there is a Xilinx FPGA, which I don't know what it does. This could really explain why the sound is so bad in RFJ 2000.

Thanks to the people at the SHMUPS Forums for providing information about the 2000 PCBs!

Back to Front Page